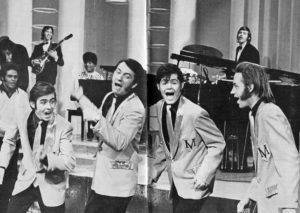 I was getting my hair cut on February 21st, 2019, when all of a sudden my phone started pinging like crazy– messages out the wazoo!

“The last time this happened, Davy Jones died,” I presciently thought. Once I was out of the hair salon, I glanced down… yep… The Tork… dead.

Almost 33 years to the day (February 23, 1986), MTV debuted a full weekend marathon of Monkees’ episodes. That was the day I first learned about the Monkees and I fell in love with them. Betamax tape after Betamax tape FILLED with Monkees episodes, watched over and over again. Concerts, finger puppets, books, t-shirts, and other memorabilia purchased over the years.

On January 26, 2004, my sister and I went to see Peter Tork perform at the Tin Angel. I wish I could say Peter was charismatic and sweet and goofy but he wasn’t. It doesn’t matter anymore. He’s gone. Davy’s gone.

Last weekend, I went to see the Micky and Mike Show in Atlantic City, NJ. The lads are in their 70’s. They said very little — but they saluted both Davy and Peter. Regardless of age and seeming a bit slower, they sounded wonderful. The show lasted an hour and twenty — it ended abruptly. No encore. Whatever. I finally saw Mike. Bucket list item accomplished!

It is strange to watch childhood loves grow old, fade, and die. It happens to everything.