I started up a new blog. It’s on Tumblr. It’s weird sh*t.

I’ve been collecting photos, books, albums, etc… that pair together Elvis and Jesus for quite sometime. I don’t have any anti-Jesus, anti-Christianity motive. I simply find it a fascinating juxtaposition. My favorite images are the ones that are truly genuine. The person who created it wasn’t trying to be rude or sacrilegious. They just wanted to combine two of their loves… I guess. I dunno.

Caught the audio of this on XM Radio and had to watch it once I got home, it’s Shaun Cassidy playing his greatest hits on Oprah.

Here he is as a young, girly stud:

Last night, Pookie and I went to see our friend play with his 80’s band, Rubix Cube. It was in University City and as it turned out, we were the oldest kids there. How old were we? Although I was wearing pantyhose and high heels… just like all the other girls; I wasn’t wearing mine with a hint of irony.

On the same episode of Oprah, the Backstreet Boys also made an appearance. Although I had friends who were Backstreet Boy fans, I always considered myself too old for them… at the time. I was still too busy digging Micky and Davy and Mike but not Peter because he is a dork. Watching their appearance, I have to admit I was surprised to find that Mark L. Wahlberg, host of Antiques Roadshow was absent. Am I insane? I always thought he was a Backstreet Boy? I guess I was wrong.

Watching the kids dance to the 80’s music, in their faux 80’s garb, got me all teary-eyed over the past. And it had me realizing my own old fartitude. I so wanted to grab the girls and give them a sweatshirt to wear and feed them a candy bar. And I wanted to show them how to really dance like the 80’s… it’s more of a kick… kick… kick-motion and less “stripper on the pole”-gyration.

I called Lisa today and told her about all the girl on girl action I witnessed and she told me that happened even way back when. I just forget. I don’t think so.

What else has been going on while I’ve been quiet? Not too much. The doctor is pretty sure I’m healthy. Pookie keeps telling me I need to go to the grocery store more often and get rid of this weird notion that the monthly grocery bill should not exceed 150.00. I won an eBook reader! But it’s just a stupid Libre and not a Kindle or a Nook. I am thinking about pawning it on eBay. My XM Radio refused to turn on this afternoon while I drove back from Pookie’s and I just about went insane listening to regular old terrestrial radio. I am pretty happy I paid the 40.00 for the platinum version of PlayOn. Now I can spend my evenings watching the Half Pint Brawlers, midget wresting show. After just one episode I knew I got my money’s worth. Honestly, have you watched this show? Those dwarves are vicious! Made the Little Cigars look like munchkins! Don’t look at me like that…. I was 5 foot 10 inches at 12 years of age, I’m allowed to have a fascination with all things small. And I just got measured at the doctor’s and I am an inch and a half taller than I ever thought. That’s about it.

On Saturday I went to Walmart and I brought Bobo with me in his little carry bag. Now, I’ve taken Bo with me to supermarkets, the mall, restaurants, movie theaters, etc… and I’ve never been stopped. This time was different. The Walmart Greeter stopped me and said, “Sorry, no dogs allowed!”

“But he’s a service animal.” 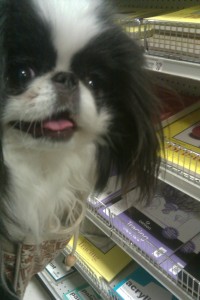 “I didn’t say he was a seeing eye dog. He’s my emotional support dog, I must have him with me at all times.”

I thought the issue was resolved but somehow the store manager was alerted and he insisted he see Bobo’s service animal papers.

AND SO I WAS KICKED OUT OF WALMART!

I made myself into a Man Men character! 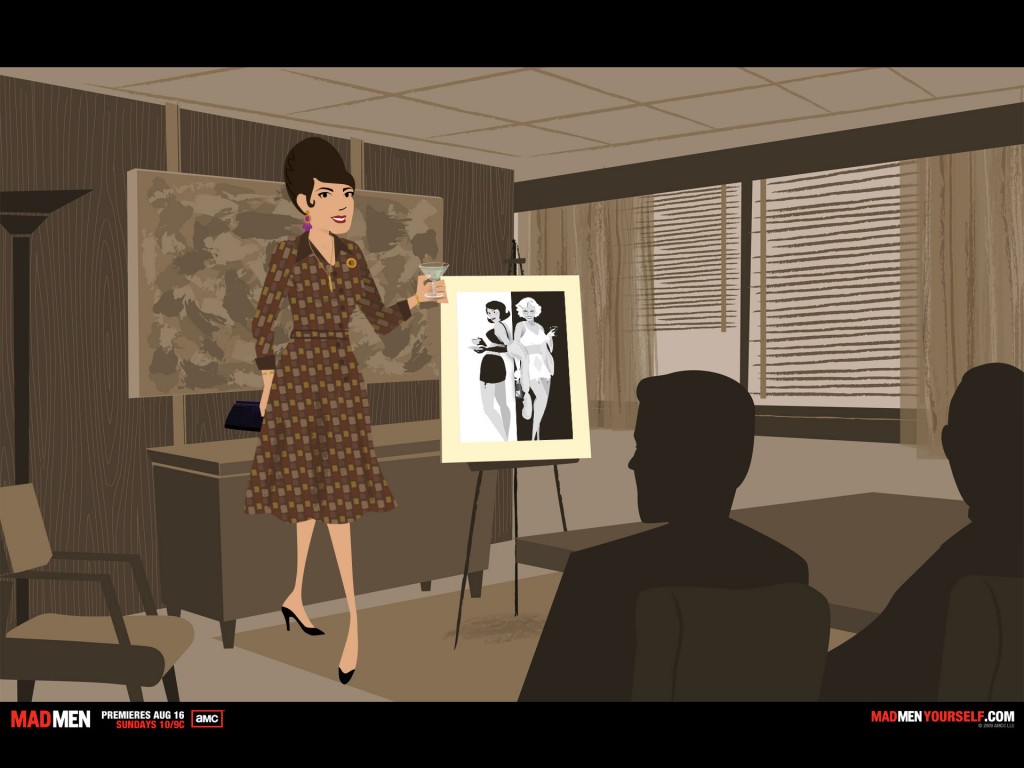 Holding a martini in a board room! Yep! That’s me!