Last night I watched I Am Love with Tilda Swinton. I’ve been wanting to see it for ages, for two reasons. 1. Tilda 2. It’s resemblance to Visconti’sThe Leopard.

Watching movies has gotten easier since I moved my flatscreen into my bedroom and made my office a true office rather than my hub. I watched the movie using my VuNow with PlayOn to stream it via Netflix Watch Instantly. I was rather torn between I am Love and Billion Dollar Brain but I Am Love won out… mainly because I LURVE Tilda Swinton and have loved her since her early work with Derek Jarman, especially Edward II and later Sally Potter’s Orlando. I Am Love did not disappoint. Weird and lovely.

After rating the movie 5 stars on Netflix, it asked me: 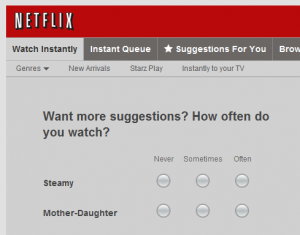 That’s just so wrong but even more importantly, what does it say about ME??!?!?

Whatever, I plan on queuing up some John Cassavetes movies.