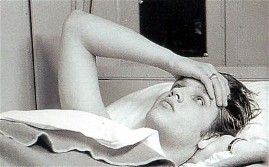 Log this one kiddies. Today was the first time pregnancy kicked my ass. Last night I was a panelist at some Social Media and nonprofit event. Eddie drove me to the event because as he said, “At 34 weeks, I am not comfortable having you going it alone.”

Afterward we went to XIX Nineteen Restaurant atop the 19th floor of the Hyatt at The Bellevue. It was truly lovely. Last weekend we were in NYC (back for my quarterly appearance on SiriusXM business show) and we had lunch at Wolfgang Puck’s Steakhouse. Nineteen was a thousand times better. But that’s not really pertinent to my story.

So anyway, we got back home and went to sleep. I woke up every hour on the hour to pee. You’d think I’d run out of fluids… but nope. Eddie wanted to get into work early and so I tried to rouse him when morning finally arrived to get him going but it was useless since I could barely get myself moving. Once he was out of the house, I fell back in bed and stayed there for a longer period of time than I can remember. I don’t sleep in. Well, not until today. I finally crawled out of bed and I am trying to get myself moving but it’s slow going. I suppose it’s okay to have a day like this as long as it’s not typical. Yet I feel guilty. Why do I think Marissa Mayer never had bad days during her pregnancy?

The later I get in my pregnancy the harder it is to sleep. I can’t even remember when I last slept through the night. I think the difficulty sleeping is my body’s way of preparing me for many sleepless nights when Jimmie arrives.

Otherwise everything else is going great. Last night, for the first time, I introduced Eddie as my husband. It felt pretty awesome. I am enjoying being married… although I never doubted otherwise. The only worry I had was that we both take it seriously and commit for the long haul. But those fears have been allayed. In fact, sitting at Wolfgang Puck’s restaurant last weekend, a woman was seated at the table next to us. Toward the end of our meal she introduced herself as a divorce court judge from Chicago and that she enjoyed being in our company because she truly believed that we were a wonderful couple. She said she’s very good at spotting what works because everyday she sees what doesn’t. That made me feel really good.

2 thoughts on “Got my ash kicked”

This site uses Akismet to reduce spam. Learn how your comment data is processed.