I bought this dress at TJMaxx the other night: 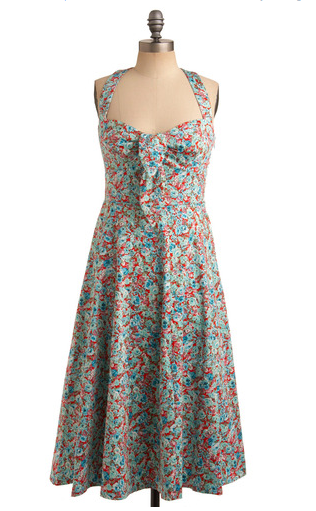 Isn’t it pretty? My plan is to wear it to Blobfest and the Blob Ball since it has such a 50’s feel to it.

Unfortunately, I am trapped inside of it and can’t get out. I thought I’d try it on but the damn zipper decided to stick (which appears to be a common issue with this dress) It’s too tight in the body to pull over my head and clearly, it ain’t going over my hips. My mom said if I give her an hour, she’ll come over and try to help but honestly, I think I may have to take scissors to it.

This situation reminds me of a time when I was a little girl, probably around 8 or 9-years-old. It was 1983 and I was in the original Zipperhead in New York City. What was a 9-year-old girl doing in Zipperhead late at night? My parents took Lisa and me to see my cousin Johnny’s art gallery showing and across the street was Zipperhead. My father was intrigued by it and insisted we go in. There was a dressing room to the left of the entrance and in front of it, on the ground, was a woman, grunting. Gathered around her feet were three Zipperhead employees, trying desperately to peel the PVC pants off her frame. She wore tiger-printed underwear. I was quite disgusted by the situation but Lisa thought it was great. That Christmas she asked Santa for PVC pants. My father bought her not only the pants but also a matching jacket and hot pink, leather skinny tie. The present was signed, LOVE SANTA! She was truly the most awesome dressed first-grader ever!

UPDATE! The zipper dislodged and I am free!

1 thought on “Trapped in the Rose-merry Making Dress”